To Care For
Sherwood Gardens

From clippings that were in the possession of the Roland Park Company, Guilford appears to have first gained prominence as the property of General McDonald, who distinguished himself in our wars with England. It is supposed that to commemorate the battle of Guilford Court House, N. C., in which he was wounded, Guilford derived its name. 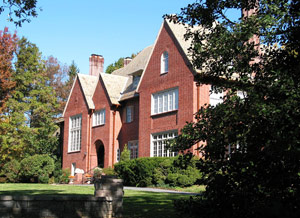 His son, William, upon inheriting the estate, about 1850, built the old Guilford Mansion, which was razed in 1914 and is now the site of the residence at 4001 Greenway. William McDonald himself was a man of no mean fame, having in his Guilford stables the fastest race horse in the United States, Flora Temple. During the Civil War he was imprisoned at Fort McHenry for allowing southern sympathizers to signal messages to the Confederate troops in Anne Arundel County from the tower of the Guilford Mansion.

The property next passed into the possession of John De Speyer, who married McDonald’s widow and it was from De Speyer that it was purchased in 1872 by Arunah S. Abell, founder of The Sun. It remained in the Abell family for 35 years, until 1907, when it was sold to the Guilford Park Company.

Purchase by the Guilford Park Company

The principal stockholders of the Guilford Park Company were Robert Garrett, William H. Grafflin, William A. Marburg, Thomas J. Hayward and H. Carroll Brown. Profit making was not the sole aim of these purchasers: they also had the purpose of preventing a beautiful tract of land, lying in the line of the city’s rapid growth to the north, from being sold in small parcels for merely speculative building operations of the usual type, and they determined that the property should be developed as a whole along the lines of the best modern methods of city planning.

With this purpose in view, there was effected in 1911 a consolidation with the Roland Park Company; Guilford thus came under a management that had demonstrated in Roland Park the wisdom of safe-guarding a neighborhood by properly restricting the uses to which the land may be put and of adding to it the improvements that contribute so greatly to the comfort of living in it, and the attractiveness of its aspect as a whole.

Planning and Development by the Roland Park Company

The property purchased for the planned residential community covered about 210 acres in north Baltimore, at the time partially in the City and partially in Baltimore County. It is bounded on the south by University Parkway, on the west by Charles Street, Warrenton and Linkwood Roads, on the north by Cold Spring Lane, and on the east by York Road. Planning and infrastructure construction began shortly after the purchase in 1911. Planning of the landscape design for Guilford was under the immediate direction of Mr. Frederick Law Olmsted, Jr. of the famous firm of Olmsted Brothers. The community reflects Olmstedian landscape design principles in its curvilinear streets and respect for existing topography and vegetation. Installation of utilities, streets, drains and other infrastructure were estimated by the Company’s engineers to require an investment of the then tremendous sum of one million dollars.

The Guilford plan provided for three parks “for general use of the residents,” two containing about one and one-quarter acres each and the other about three acres. ‘The Little Park’ is located between St. Paul Street and Greenway, near the southern entrance; ‘Stratford Green’ is centrally located in the northern part of the property; while ‘Sunken Park’ is on Charles Street in the northwest section. Other common park-like areas were provided within blocks for the use of abutting residents. In 1939 a fourth park was created through the purchase by the Guilford Association of the property between Greenway and St. Paul Steet north of University Parkway. The property was dedicated to the residents of Guilford as a Park to be known as “Guilford Gateways.”

The Sale of Lots

On the morning of Friday, May 9, 1913, there appeared in the Baltimore newspapers a full page advertisement stating that ten days hence home sites would be offered for sale for the first time in Guilford. A general outline of the policy of development was included in the announcement.

By December 1913, only seven months after the opening of Guilford, one-eighth of the entire development had been purchased by home seekers, appreciating the beauty, convenience, and security of this development. The year 1914 brought great activity to this section of the city. It was in January that newspapers picture Gilman Hall, on the Homewood grounds of the Johns Hopkins University, as rapidly nearing completion. The contract to design the New Episcopal Cathedral was awarded by Bishop John G. Murray to the New York architect, Bertram Goodhue, who during his life designed many beautiful Gothic churches. It was also during this year that Cardinal Gibbons approved the plans of the Jesuit Fathers to move Loyola College and St. Ignatius Church to the northern boundary of Guilford. Possibly the last of the old toll gates disappeared this year with the demolition of the gate at Charles Street and University Parkway, which had been located on this corner since 1857.

However, 1914 also brought war to Europe and it was not until April, 1925, that the completion of streets and utilities in the entire development was announced. Guilford has become a community of almost eight hundred residences – world famous for the mark it has set in suburban planning.

The homes of Guilford were designed by some of the greatest Baltimore architects of the era. They included Edward L. Palmer, Bayard Turnball, John Russell Pope, W. D. Lamdin and Laurence Hall Fowler. Building materials range from brick and stone to stucco with carefully defined details. The homes are designed in predominantly early 20th century revival styles that reflect European influences. There are many colonial or federal prototypes, but many are Tudor Revival in style and others used English vernacular forms as inspiration as well as the residential work of the architects of the English Arts and Crafts movement. Renaissance Revival styles of French and Italian influence also appear in Guilford. Structures were developed under the oversight of the Roland Park Company with strict review of plans as provided in the covenants of the Deed and Agreement.

Many years ago the Roland Park Company completed the sale of all lots in Guilford. Following that, in order to continue restrictions which maintain the residential status of the community, the Company assigned to the Guilford Association, Inc. all its remaining rights and powers. Through extensions of the agreement these powers continue to be vested today in the Association. The Guilford Association maintains the neighborhood’s integrity through the covenants in the Deed and Agreement, exercising oversight and guidance that resulted in the unique community and quality living environment.

A more detailed description of Guilford’s history is contained in a series of articles that appeared in The Guilford News beginning in the Fall of 2010. They are available in the newsletter archives found on this site and easily accessed in one file link: GuilfordNewsHistoryArchive.pdf

To Care For
Sherwood Gardens